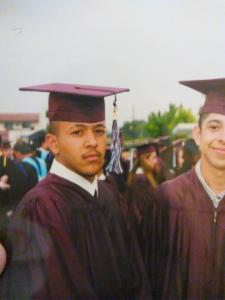 Jose Mendoza was wrongly convicted in October 2001 for aiding and abetting  the April 13, 2001 murder of Armando Rodriguez on Exeter Street in Paramount, Los Angeles County, California, around 9pm. Jose was age 19 at the time, and was was sentenced to 50 years to life in prison.

Anthony Contreras was also wrongly convicted at the same trial. Ruben Martinez who committed the crime was charged, but then charges were dropped a few days before trial. Jerry Rivas, a 14 year old who was present at the shooting was also convicted. Martinez was killed in 2005. In 2010 Rivas said that Martinez committed the crime, and only he and Martinez were present.

The prosecution case was that Jose was the driver.

Juan Torres was a gang member from Compton who was arrested in June 2001 for carjacking and robbery. Torres told police he had information when he was arrested, and apparently in exchange for his testimony his sentence was reduced by 11 years.

Torres had sold a gun to Jose several weeks after April 13. Jose was shot at in Watts a few weeks after April 13,  so Torres offered to sell him a gun for personal protection. Police found the gun at the home of Jose’s mother in Watts. At trial, the district attorney claimed the gun was murder weapon however tests were inconclusive. The gun sale was never brought up at trial.

Torres testified that at 1:45pm on April 13, he, Contreras, Jose and Rivas left Contreras’ home and drove around for an hour in a minivan, with Torres and Contreras in the back smoking crack cocaine:

However court records show this is impossible. Jose had been living with Mrs. Shock, his 5th grade teacher who took him in due to his father being abusive. Mrs. Shock and Jose were in court around 2pm on April 13. The minivan was owned by Mrs. Shock, who was disabled from birth and used an electric scooter for mobility. The minivan had a hydraulic lift for the scooter that took up the whole rear of the van, so she could not have travelled to court other than by using her specially equipped van.

In June 2010, Jerry Rivas told an investigator that he went with Ruben Martinez to Exeter Street to purchase marijuana, was present at the shooting, that Martinez was the person who shot Rodriguez, and he was the only person with Martinez when Rodriguez was shot.

So in fact both Jose Mendoza and Anthony Contreras were wrongly convicted. Rivas was aged just 14 at the time. Ruben Martinez, the shooter, was a friend who had previously shot his own brother over 20$. He was killed in 2005.

Before Martinez died, he wrote a letter addressed to Jose ( note: Jose prefers to be known as Joe ) :

In the letter Martinez says he is sorry and “hopefully I’ll be able to straighten things out”.

The letter was never sent to Jose, however after Martinez died, it emerged that Joe Perez and his girlfriend Yvette Solorazno would let Martinez stay the night at their home due to Martinez being homeless. Martinez would get drunk and write letters. One night Martinez asked for 5$ to buy a card because he wanted to send a letter to Jose. Martinez bought a card filled it out, sealed it and gave to Joe Perez to mail. Joe Perez never mailed the letter as he didn’t think it was a good idea, but after Martinez was killed Joe Perez told Yvette Soloranzo that he still had the card addressed to Jose and Yvette made Joe Perez give the letter unopened to Mrs Shock. An investigator interviewed Yvette Soloranzo in April 2007, and she confirmed the authenticity of the letter:

Jose’s appeals have been denied, Contreras and Rivas were both released, but Rivas is back in custody.

Appeal Ruling from 2006, has many useful facts.