In the early morning hours of Sept. 13, 2013, Victoria Rickman called 911 to report she had repeatedly shot her boyfriend, Will Carter Jr. She said he raped her. Rickman said she shot to stop the attack.

Defense attorney Amanda Clark Palmer says”She didn’t invite him over. She didn’t want him over there. She didn’t plan to kill him. And she didn’t murder him. I 110-percent believe she shot him in self-defense.”

Stanley was a criminal informant, and had a record of 12 arrests for property destruction, assault and battery, disorderly conduct and annoying phone calls. He was also violent and had been stalking Donna for many months after being released from jail in February 2008 after signing a Confidential Informant Agreement.

On June 7, 2008, at a wedding, Stanley’s family told Donna that he had abused “every woman he’s ever dated”. Shortly after, a fight broke out between Stanley and his family, and later that night Stanley beat Donna bloody, bashed her head into her headboard and threw her onto the floor kicking her repeatedly.

Despite complaints to police, Stanley was not arrested, and Donna could not obtain any protection from him, apparently due to his status as a paid police informant.

On July 25, Donna shot Stanley at her home after he threatened to kill her and her son.

Donna was convicted of first degree murder on the basis of the testimony of six jailhouse informants who claimed she gave different accounts of events on July 25 and sentenced to life without parole.

Amber Hilberling admitted to pushing her husband, an Air Force veteran, out of their 17th-floor apartment in Tulsa during an argument in June 2011.

But she claimed in court she did not intend to kill him, and blamed his fatal fall on “dangerously unsafe” window glass that was too weak to stop his plunge.

Amber, who was seven months pregnant when her husband died, cited self-defense and even rejected a plea deal that would have given her only five years behind bars.

But a jury convicted her of second-degree murder in 2013, after only three hours of deliberation. A judge sentenced her to 25 years in prison.

Amber still stuck by her self-defense claim, repeating it in a televised prison interview with Dr. Phil.

“There was an altercation in which I defended myself,” she told Dr. Phil, adding that her husband flew into a rage after she called him a coward.

She also claimed in the interview that her husband abused her through their 11-month marriage, and she always kept quiet about it.

“I was really good at lying,” Hilberling said.

“That was our relationship: Josh getting in trouble over and over again and me saying, ‘Oh, no, it’s not his fault. That’s my fault. I did that.’

In October 2016, Amber committed suicide in her prison cell. 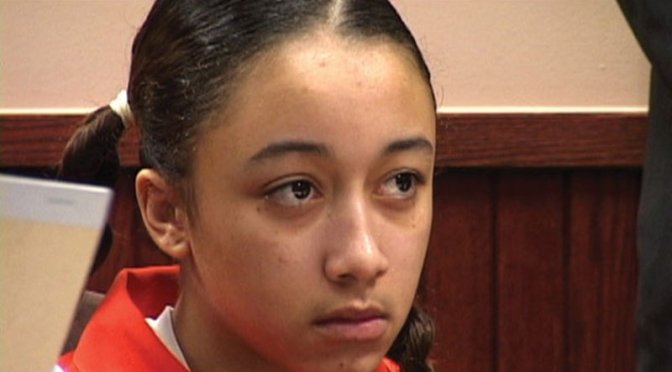 Cyntoia Brown was convicted of murder for shooting and killing Johnny Allen, a 43-year-old man. She was aged 16 at the time, and had a physically and sexually abusive boyfriend named “Cut-throat”, who brandished guns at her and forced her into prostitution. She stated that she had been repeatedly raped, was on drugs, and afraid that she would be shot when she shot Allen.

Rachel Moore is serving a life sentence in Mississippi for shooting her abusive husband.

After Rachel’s husband beat her one evening, she grabbed a shotgun. She fired a warning shot into the air and gave him several verbal warnings to stay away from her. When he continued to approach her, she shot him.

Jessica Burlew, a 17 year old girl diagnosed with schizophrenia and autism, has been held in isolation in Estrella Jail since January, 2014. She was been charged with 2nd degree murder for the accidental death of Jason Ash, a 43 year old man who was sexually exploiting her.

“Eighteen-year-old Jessica Burlew has been in jail for 571 days as her public defenders and the state of Arizona waded through the complicated and drawn-out process of preparing for a homicide trial. A source close to the situation now tells New Times that attorneys and relevant parties have discussed and debated terms of various plea bargains for months, and court documents suggest that a tentative settlement of a manslaughter plea has been reached.

In return for a guilty plea, Burlew’s second-degree murder charge would be lessened to manslaughter.”

Debra was convicted of the murder of her baby during childbirth in 1994, she plead not guilty, but was convicted and sentenced to life in prison without possibility of parole.

The conviction was highly questionable, and her legal representation has been poor.

The prosecution case was that Debra dangled the baby in the toilet after giving birth, which seems quite improbable.

The jury didn’t believe that and thought her baby fell into the toilet and drowned, but convicted her anyway.

There was no evidence of drowning. The suggested motive (she thought the father might be someone other than her husband) is not at all credible, and the medical testimony was not consistent.

Jodi Arias defended herself from repeated attacks by her abusive ex-boyfriend Travis Alexander after she dropped his camera.

The prosecution attempted to prove premeditated murder with a ridiculous circumstantial case based around Jodi using three gas cans (false), and changing her hair color on her trip to visit Travis (also false), among other rubbish cited as evidence of premeditated murder.

In addition the State changed it’s theory over the order of the injuries, in a blatant attempt to pit the testimony of the medical examiner against Jodi’s truthful testimony of what occurred. This culminated in a ridiculous claim that his own autopsy report had a “typographical error”.

The physical evidence shows Alexander was shot first, then he stands at the sink, indicating he did not anticipate further attack, consistent with Jodi’s testimony that she shot him by accident.

Diane allegedly shot her own son, herself and her other two children in 1983 for no good reason, but the real killer was an abusive local psychopath. Daughter was coerced into testifying against her mother (“they knew that she did it and I should say that she did it”). Her son said it was “a bad man” who shot his mother, but jury never heard that.

Darlie and her two sons were stabbed at her home on 6/6/1996. Allegedly performed elaborate staging of crime scene, including a bloody sock found 75 yards from her house. Has been waiting on Texas death row for new DNA tests to be performed since 2008. Extensive support from many innocence groups. Discredited “cargo cult science expert” Tom Bevel involved.

Is this Texas mother a victim or a murderer? Death Row Stories, July 2015

Darlie Routier is still on Death Row in Texas despite overwhelming evidence that her conviction for killing her own child is false, whilst Knox, Sollecito and Kiszko have been vindicated by the highest judicial authorities and telling evidence. The authors show how and why unfounded rumours still persist in the Knox/Sollecito case and advance a new theory that the Routier killings were the work of a notorious serial killer.