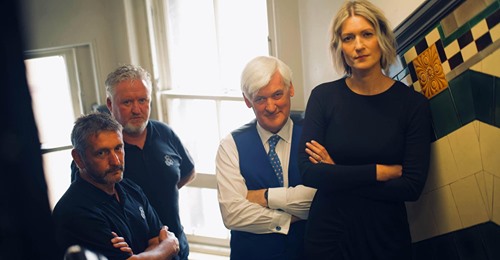 Jodi Jones, age 14, was brutally murdered in Dalkeith, Scotland on 30 June 2003. Police at once focused on Luke Mitchell, Jodi’s boyfriend.

Luke was arrested and charged eight months later, after a media storm, and was ordered to serve at least 20 years in prison.

However, he is blatantly innocent, the victim of trial by media.

According to a report on a documentary broadcast on February 24, 2011

Investigators John Sallens and Michael Neil found another person of interest to the crime who “turned up with scratches on his face” the day after the murder. Mark Kane was an alleged drug user studying at Newbattle Abbey College in Dalkeith, who was “untraceable” during the murder hunt. He bares a striking resemblance to Luke, and lived very close to the murder site. He’s described as “a very, very disturbed boy who carried a knife” and was on methadone at the time, as well as cannabis and lager. Mark says he obtained the scratches by “falling in a bush”.

Jeremy Bamber was convicted of the murder of his adoptive parents, his sister Sheila Caffell, and Sheila’s two children on 7 August 1985. After initially being sentenced to 25 years, the sentence was later increased to a whole-life order.

Initially, police believed it was a case of murder-suicide by his sister who had a history of severe mental illness, but a month after the shootings he was arrested and charged with murder.

The critical evidence that convinced the jury of Jeremy’s guilt was a flake of blood found on a silencer found in a cupboard. At trial, the jury was told that the discovery of an enzyme from the blood was clear evidence that the blood found on the silencer came from Sheila. However the jury never knew that this blood could have been from animals. The rifle and the silencers were used to shoot game and could have been carried alongside rabbits when returning from a shoot. Had the jury known that two types of animal blood were found on the outer surface of another silencer, they would have known that the blood was more likely animal blood than Sheila’s blood.

Korean English language student Jong-Ok Shin was stabbed to death in the early hours of July 12, 2002 in Bournemouth, UK.

Omar Benguit was arrested 6 weeks later, after being named by a  heroin addict Beverley Brown. He was eventually convicted after three trials, but a co-defendant was acquitted at the second trial after Brown’s account was contradicted by a speed camera and CCTV evidence.

Although many other drug addict witnesses eventually partially corroborated Brown’s story ( which changed substantially ), none of these witnesses seem credible, and several have retracted, explaining they were pressured by police.

There is a plausible alternate suspect, serial killer Danilo Restivo, who lived just two streets away from the victim.

In a six-part BBC documentary, a journalist and retired detective found that the conviction was unsafe.

50-year old Barry Selby was attacked in the bedroom of his home, in Rayleigh Street, East Bowling, shortly after 2am on Monday, October 14, 2013, while his wife and daughter were present. Five men drove to his home and smashed open the front door . Three of the intruders went upstairs and confronted him.

Mr Selby was shot in the leg and doused from head to foot in sulphuric acid. He suffered 50 per cent acid burns and died in hospital four days later when his vital organs failed.

According to Lee’s family, there was no forensic evidence to connect the men to the attack. Four months after the attack, the victim’s wife identified Lee in an identity parade, but she admitted her family had shown her pictures of Lee on facebook. The only other evidence was a drug addict who subsequently admitted he was lying. Two witnesses have come forward to say that the addict had bragged about stitching Lee up. “He was convicted from an identity parade months after the murder. He had to wear a balaclava and he was convicted because someone said they recognised his eyes.” according to Lee’s mother.

Michael Stone was convicted of the 1996 killings of Lin Russell and her daughter Megan, six, and the attempted murder of Megan’s sister Josie, nine, on a remote footpath near Canterbury, UK in 1996.

Stone consistently maintained his innocence, but was convicted mainly on the testimony of a jailhouse informant who claimed he confessed through a heating pipe between the cells. At the first trial two other informants also claimed he confessed, but one retracted and the other was discredited.

There was no forensic or eyewitness identification to connect Stone to the crime. Eyewitnesses saw a beige car used by the killer, but Stone drove a white car. Stone was a heroin addict, with a record of violence and stealing from garden sheds, but the remote rural location is a very unlikely place for a burglary or robbery.

A forensic specialist has said that advances in DNA techniques not only confirmed no link between Stone and the crime, but showed the likely presence of another man at the scene. Samples obtained from the family of Levi Bellfield, who was convicted for the murder of schoolgirl Millie Dowler and two women, showed a possible but unprovable link to him.

On July 23, 2011, fire officers arrived at a garage in Selly Oak, Birmingham, and found two men crouching outside with severe burns, and a burning propane cylinder inside.

Mr Wilding, 41, had suffered fatal burns to half his body. Mr Cotterill, then 34, endured terrible injuries, spent 48 days in intensive care and lost all his fingers.

Stephen Newman, who admitted being present, was convicted in 2012 of deliberately directing  the flame from the cylinder at the two men, and sentenced to 23 years in prison.

Mr Wilding and Mr Cotterill had found the disused garage off an alleyway and turned it into a squat. Stephen and others visited the building the day before and the three had been drinking heavily.

Stephen says he did not light the cannister, and it was was activated by Mr Wilding in an attempt to dry damp trousers belonging to another individual. He heard the cannister hiss, and residents near the garage heard the same noise, believed an explosion was imminent and urged those inside to flee. CCTV footage shows him exiting the scene alone.

A local newspaper after  viewing witness statements and conducting interviews has concluded that there are, at the very least, significant questions that remain unanswered.

In January 2013,  Mr Cotterill stated: “I did not see Stephen light that gas cannister. I didn’t see what happened.”

There was no motive or reason for Stephen to attack the men, and his brother has said: “Stephen was placid, really. He would not harm a fly. Even if he tried, he couldn’t. He would not be capable of using a gas bottle to attack these people because that was not his character.”

After losing an appeal against his conviction, Stephen has been on hunger-strike, and has not eaten for three weeks.

Anthony Davis was wrongly convicted of the murder of a man who was beaten and abducted from his home in August 2007, during a botched robbery.

There was no evidence other than the word of the true perp who was given a light sentence, apparently in exchange for testimony.

Evidence was ignored by police, hidden from the defence, and not available to the jury nor to the court that subsequently rejected his appeal :  cell phone analysis and a bloody footprint made by a distinctive pair of Nike trainers, the same as those retrieved, by the police, from the home of Sonny Stewart.

But Davies’s barrister, Benjamin Nolan QC, told Panorama it had been a bogus charge created for Sonny Stewart, who had “slipped up” during the police interview.

Davies, now 31, along with three other gang members, lost an appeal against conviction two years ago.

But Patrick Davies, who featured on the Panorama programme, told the Telegraph & Argus yesterday: “It will help my son’s case because it shows that he wasn’t involved and there was no evidence against him other than by the supergrass. You have to question the reliability of his evidence.”

Justice for Women ( who are advocating for Stacey ) | Facebook

Justice for Women, who campaigned on behalf of Miss Hyde have slammed the prosecutor Christopher Quinlan QC for “aggressively pursuing” the prosecution in the face of what they described as: “overwhelming evidence that undermined his case for murder. In particular, at the appeal the adolescent psychiatrist instructed by the Crown was unable to support the prosecution and instead gave evidence for the defence.”

A spokesman for Justice for Women said that despite evidence in support of self defence, Miss Hyde was willing to plead guilty to manslaughter. These detailed representations were rejected although the DPP refused to provide reasons for her decision.

Speaking after the verdict, Miss Hyde said: “I would like to say thank you to Justice for Women, my legal team, friends and family for believing in me and giving me hope and strength to never give up. I will be forever grateful and blessed to have been given my life back.”

Outside the court, Hyde said on Thursday: “I would like to say thank you to Justice for Women, my legal team, friends and family for believing in me and giving me hope and strength to never give up. I will be for ever grateful and blessed to have been given my life back.”

Francis, 33, also from Wells, had a history of violence towards women. It was acknowledged by the prosecution that there had been 27 separate incidents of domestic violence between him and his girlfriend, Holly Banwell, and that he had also been violent towards his previous girlfriend.